Is interleague play worth it?

The Red Sox present a one-of-a-kind auction at Fenway
Posted by Derek at 7:29 PM No comments:

Manny being Manny may be a thing of the past

Test your John Smoltz knowledge
Posted by Derek at 8:16 AM No comments:

Could the Red Sox stand pat at the trade deadline?
Posted by Derek at 6:58 PM No comments:

Obviously UWBadgers.com does not have the server power to withstand the current rush to sign up for football tickets. I still think this is better than last year's lottery, but the athletic department obviously needs to work out more kinks for next year.

What do you suggest? Leave your comments here.
Posted by Derek at 8:31 AM 13 comments:

NFL Notebook: Trade tradition: Demands to be dealt don't have to be part of NFL

Donate baseball gear at Fenway to benefit a good cause

Ryan Leaf arrested on burglary charges
Posted by Derek at 2:13 PM No comments:

Start being a regular NESN.com visitor

You're a New England sports fan. You love the Sox, B's, C's and Pats. You read ESPN.com, check The Boston Globe and the Boston Herald for some stuff. Maybe you hit up SI.com and Yahoo.com for some national stuff too.

NESN.com should be your first visit for sports info every day.

It has up-to-the-minute Boston info from news to rumors to opinion, including content from Tom Caron, Heidi Watney (top left), Kathryn Tappen and the rest of NESN's friendly faces -- all of whose stuff I edit and post on a daily basis.

We're launching a new version of the site very soon and it's going to make NESN a must-stop site to quench your sports thirst. But no need to wait until then, start becoming a regular now. You won't regret it.

Plus I write stuff there, too. Isn't that enough incentive to go?
Posted by Derek at 10:34 PM 1 comment:

Greene is someone that I had the pleasure of witnessing live last season, from the friendly confines of Iowa City’s Kinnick Stadium’s press box. Greene tore up Wisconsin, rushing for 220 yards and three touchdowns on 25 carries (Mike Ackerstein wrote the gamer, but I wrote the creative headline Sunday night for Monday’s print) en route to a 38-16 romping of the feeble Badgers – their fourth straight loss at the time.

But Greene’s numbers (1,850 yards, 20 touchdowns in 2008, his junior season) are only half as impressive as his story. Greene failed out of school in 2007, forced to move furniture at a store down the street from Kinnick Stadium to stay afloat financially. To make a long story midget-sized, he made the most of his second chance, leading the Big Ten in rushing, and landing with the Jets in April’s draft.

When I saw the Jets landed both Mark Sanchez and Shonn Greene in the first three rounds, I remember nodding my head from Krakow, Poland. “Well done,” I thought. Greene has the speed, strength and tackle-shedding abilities to be a successful NFL running back. I hate the Jets, but I’m a fan of Greene. I enjoy comeback stories, kids who taste the real world before signing for millions. I think that experience will serve him well for what his NFL future has in store for him.

He’ll make the Pro Bowl some day, too. And remember, you heard that here first.

In touch with my feminine side

Monday I was listening to Bill Simmons’ podcast, “The B.S. Report” in the car. ESPN’s Erin Andrews was his guest and at one point she started talking about the difficulties about being a female sports reporter, one of which being that some males simply don’t want accept sports information from a woman, Ron Burgandy style.

Put down your newspaper, take the tape out of your VCR, finish paying your bills via checks and get with the program. It’s 2009.

Guess what? Women feed our sports info hunger, and they’re damn good at it, too. Ever watch Jackie MacMullen on “Around the Horn” or read Amalie Benjamin in The Boston Globe? Andrews may be the best in the business. They know their shit.

Face it guys, Andrews is smarter than you, more articulate than you, more professional than you, much better looking than you and she knows more about sports than you. People see her blond hair and assume she’s a ditz. Well, we all know what happens when you assume.

I know the counterargument: “I want to hear it from someone that’s been there, someone that played.” That’s reasonable, but there’s a place for ex-players, like pre-game shows and in-game color men, like how NESN’s Jim Rice complements Tom Caron and Jerry Remy (get well soon, RemDawg) complements Don Orsillo in the booth. And the Heidi Watneys and the Andrews’ dig for stories and give us the dirt.

More and more women are entering the sports world, which – no matter what you say – is a good thing. They bring a new perspective to the games dominated my testosterone for decades. They’re not going to tell you how to hit a 95 mph fastball or wrap up LaDanian Tomlinson, but that’s not their job. Rick Reilly, Bill Simmons and Mike Greenberg don’t either, and you still read, watch and listen to them. The three of them together couldn’t bench press the bar. It’s called media, becoming the bridge from teams to fans. It’s a skill, and some women do it damn well.

Wait, you don’t know how? And you’re still pissed that she’s on ESPN? You’ve got bigger things to worry about, pal.

Only one NESN link today:

Report: Phelps to ink first deal since weed incident
Posted by Derek at 4:08 PM No comments: 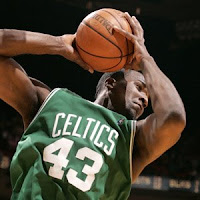 According to Michael Felger on Comcast Sportsnet’s “Sports Tonight” Monday night, “We heard a rumble today, just a little rumble. Danny’s throwing a bunch of stuff against the wall as he likes to do. Memphis sitting there at No. 2. Perk and… [Bill Walker].”

In this situation at No. 2, the Celtics have three apparent moves. The first, and perhaps most sensible would be taking UConn’s Hasheem Thabeet. If they were to deal Perkins, they immediately lose a young, defensive-minded starting center to complement Kevin Garnett, who still has three years left on his current contract. If they were to take anyone else here, they’d have a huge hole to fill at the five spot, which is essential in making a championship run, especially for a defensive team like the Celtics. At seven-foot-two, Thabeet can immediately contribute on the defensive end as a natural shot blocker and rebounder next to Garnett.

If Ainge values upside over need, he may take either Spain’s Ricky Rubio or Memphis guard Tyreke Evans, whom he reportedly has interest in. Either would create a crowded Boston backcourt, assuming the team keeps Ray Allen and Rajon Rondo, which at this point, are big assumptions.

Of course, this is all speculation, but it seems as though Ainge is exercising all potential trade options before the June 25 draft. The only names that haven’t come up over the past few weeks are Garnett and captain Paul Pierce.

The Grizzlies originally drafted Perkins in 2003 with the 27th overall pick, then immediately traded him, along with point guard Marcus Banks to the Celtics for Dahntay Jones and former Boston College guard Troy Bell, who were taken by Boston in the same draft. The Washington Wizards selected Walker in the second round in 2008 before shipping him to the C’s for cash.

This story was written to run on NESN.com, but was not posted.

Has Epstein learned from past mistakes?
Posted by Derek at 2:55 PM No comments:

One-cent decision time: Save a Penny, or spend it?

Shaq to join LeBron in Cleveland?

McDaniels: Orton will start in '09

Pedroia not in Sox' lineup Sunday
Posted by Derek at 2:35 PM No comments:

Real Madrid nabs Ronaldo from Man U
Posted by Derek at 6:20 PM No comments:

Flyers bottled up, bow out By Derek Zetlin
Posted by Derek at 12:19 PM No comments:

Epstein burying Cashman since turn of the century

Montana's son commits to University of Washington
Posted by Derek at 1:58 PM No comments:

Who could Celtics take with Grizzlies' No. 2 pick?

Purple could be Favre's next favorite color
Posted by Derek at 2:44 PM No comments:

Vinatieri goes under the knife

Yahoo, NFLPA in heated fantasy dispute
Posted by Derek at 1:51 PM No comments:

Flyers go full throttle by Derek Zetlin
Posted by Derek at 5:40 AM No comments:

Unqualified: Americans fall to Costa Rica
Posted by Derek at 2:06 PM No comments: 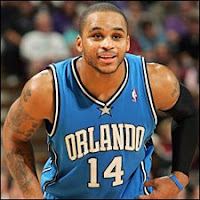 Orlando Magic point guard Jameer Nelson was said to have season-ending shoulder surgery on his torn right labrum back on Feb. 19.

That was before the Magic’s season extended into June.

Now, according to ESPN.com, Nelson’s teammates are optimistic that their backcourt quarterback will return to play in the Finals, which start Thursday in Los Angeles.

“I expect to see him out there at some point in the series,” backup point guard Anthony Johnson told ESPN.

Orlando GM Otis Smith, however, is not completely buying the optimism.

"It's still no in my mind," Smith said about Nelson’s possibility of returning this season. "There's a very smidgen of a chance he can play."

Nelson has been playing in full-court games and participating in non-contact drills for two weeks.

“I've been known to do some amazing things sometimes," he said, hinting at his possible return.

With Nelson on the shelf for what was supposed to be the rest of the 2009 season, the Magic traded for then-Rockets point guard Rafer Alston in part of a three-team deal on Feb. 19, the same day Nelson went under the knife.

In the deal, the Magic sent Brian Cook to the Rockets, while Adonal Foyle, Mike Wilks and a 2009 first round draft pick were sent to the Memphis Grizzlies.

Alston averaged 12 points and 5.1 assists per game for Orlando during the regular season, and his postseason numbers (12 and 4.1) have been just as consistent.

This post was originally intended to run on NESN.com, but never did.

Where does Ellsbury belong in the order?

What Papi's decline means to Boston

Man U changes jersey sponsor for 2010 and beyond
Posted by Derek at 2:47 PM No comments:

Super stall By Derek Zetlin
Posted by Derek at 5:35 AM No comments:

Future trades depend on Papi
Posted by Derek at 7:41 PM No comments:

Slow start dooms Flyers By Derek Zetlin
Posted by Derek at 5:35 AM No comments: